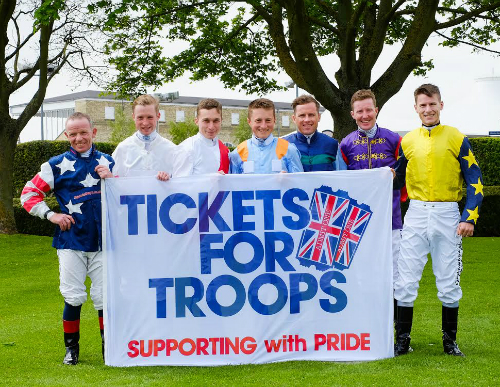 SIXTY racecourses have invited members of the Armed Forces to join them at the races this season through Tickets For Troops.

There are 60 racecourses across Britain from Perth in Scotland to Newton Abbot in Devon.

These and all other racecourses including Bangor-on-Dee, Doncaster, Fontwell Park and Sandown Park have all signed up to support the Armed Forces community with a donation of FREE tickets to their prestigious race days.

Veronica Bamford, Director of Operations at Tickets For Troops said “In an exciting year for the charity where we’ll be donated our one millionth ticket, we’re thrilled with the generosity of the horse racing community who so clearly stand behind our servicemen and women and reward them for their service.

This phenomenal level of support once again demonstrates the high regard our nation has for our marvellous troops and we’re very proud to be able to help facilitate thousands of tremendous experiences.”

Robin Mounsey, Head Of Media at the BHA “Racecourses are more than just sporting venues, they also play an important part in their local communities and the rural economy. The generosity of our racecourses in donating tickets for this wonderful cause reflects that spirit of community, and clear support for the dedication and bravery of our armed forces. We hope that many servicemen and women enjoy the sensational sporting experience that a day at the races provides in 2017.”

Jan Denning, Commercial Director at Wolverhampton Racecourse and Conference Centre said: “We are proud to support Ticket For Troops and are very humbled in doing so. Our troops give so much selflessly to us, it is the very least we can do to show our appreciation in whatever way. Thank you for all you do.”

Nadia Powell, General Manager, Market Rasen Racecourse, said: “Being Lincolnshire’s only racecourse in a county with a long and proud history of military service to the United Kingdom, we have been and continue to be delighted to welcome a large number of visitors from local Royal Air Force bases, such as RAF Waddington, RAF Scampton and RAF Cranwell, to our race meetings.

Market Rasen Racecourse is a popular day out for families and service personnel have certainly taken the opportunity to apply for admission under the Tickets For Troops initiative and enjoy our attractive fixtures such as County, Super Sundays and Family Extravaganza days.”

Alex Eade, General Manager, Goodwood Racecourse said: “As a former Royal Engineer Officer I was very pleased to be in a position at Goodwood to support this important initiative and it is great to see the whole racing industry feeling the same way. I look forward to welcoming many more of my former colleagues to an exciting day’s racing at Goodwood in the near future.”

Jeannie Chantler, General Manager at Bangor on Dee Races said: “Bangor on Dee as a small local track has been delighted to be able to support Tickets For Troops since its inception, it is great to see that there are plenty of folk taking up the offer and even better that many of them come time and time again.  To be able to help them is brilliant but also it aids the racecourse with their return visits and no doubt others coming with them on return trips.  Well done Tickets For Troops for gathering in all 60 tracks and well done racing for all supporting this very worthy cause.”

Katy Webster, Marketing & Sponsorship Coordinator at Perth Racecourse said: “Perth Racecourse are delighted to be supporting Tickets for Troops for the 7th year.  It is a cause close to our hearts and looking forward to welcoming troops to Perth Races in 2017.”

Bob Young, Chief Executive at Taunton Racecourse said: “The Armed Forces do a tough job and we wish them well.”

Dan Thompson, General Manager at Exeter Racecourse said: “It has been great working with Tickets For Troops; a partnership which started a few seasons ago. Since working with them we have found the take up increase each year and we hope for this to continue in the future.”

Ashley Morton-Hunte, Corporate & Racing Communications Manager at Ascot Racecourse said: “We are delighted to be able to continually support this charity and the fantastic opportunities it gives members of the Armed Forces. We hope that attending an Ascot race day is a truly memorable experience for them.”

Sarah Jones, Sales Manager at Ffos Las Racecourse said: “Ffos Las Racecourse is proud to support Ticket for Troops, it’s a small gesture but they do so much for our country that if we can help in anyway to let them enjoy their down time then we are pleased to be part of this great organisation.”

Mark Edwards, Racing Sales Manager at Doncaster Racecourse said: “We are happy to support our armed forces at Doncaster and we look forward to working together for many more years.”

Ilona Barnett, Racecourse Director at Stratford Racecourse said: “We are delighted to be part of Tickets for Troops initiative and we look forward to welcoming many more personnel and their families during the 2017 racing season.”

Erin Boswell, Marketing Manager at Ripon Racecourse said: “It’s wonderful news that the campaign now has the full support of the racing industry, we have been supporters of Tickets for Troops for a number of years now and think it plays a big part in offering quality family entertainment to those who work tirelessly to support our country.”

Joe Pollak, Senior Marketing Executive at Windsor Racecourse said: “The team at Royal Windsor racecourse are proud to support the Tickets for Troops initiative and congratulate them on reaching the milestone of all 60 racecourses in the UK supporting this cause. We look forward to welcoming troops across our 27 fixtures in 2017.”

Russell Bowes, Chief Executive at Plumpton Racecourse said: “Plumpton Racecourse has been happy to support this worthwhile charity for many years, and we look forward to working with Tickets for Troops in the future, to continue to offer a great day out to members of our Armed Forces.”

Andrew Perkins, Executive Director at Lingfield Park Racecourse said: “Lingfield Park is delighted to support Tickets for Troops and welcomes with open arms any member of the Armed Services to our race days. As part of Arena Racing Company, we have signed a five-year commitment to The Armed Forces Corporate Covenant which means wherever possible we will support the employment of veterans and their spouses, young and old, and offer support in any way we can to the Armed Forces community.”

Danielle Skelton, Executive Assistant to CEO and Head of Marketing & Operations at Hamilton Park Racecourse said: “The team at Ticket for Troops do a great job and we’ve been privileged to be able to support them for the last 6 years. It’s such a fantastic cause and one we’re delighted to be involved in given the job our Armed Forces do for all of us.”