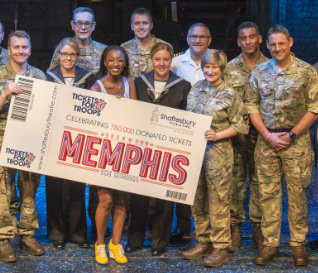 Queen of British Soul, Beverley Knight invited troops and their families to watch her West End hit show Memphis the Musical on 25th June in celebration of Tickets For Troops’ 750,000th donated ticket.

The charity has now distributed ‎three quarters of a million FREE tickets for sports, music, theatre, cultural and entertainment events across the UK.

The charity recognise the troops’ commitment, drive and dedication by offering them, on behalf of their donors, tickets to events which they can share with their loved ones, as a small acknowledgement of the work they do on our behalf.

The milestone, which also falls ahead of Armed Forces Day (27th June) has been marked at the Shaftesbury Theatre in London by Beverley Knight, the British recording artist, radio presenter and musical theatre actress.

Beverley has a very personal connection with the Armed Forces with a member of her extended family having lost both his legs and left arm in an IED attack whilst on patrol in Afghanistan in 2009.

She approached the charity directly to ask how she could help with a donation of tickets and was delighted to be able to help them celebrate their milestone and meet so many troops and their guests before they watched her show.

Beverley Knight said: “It is a real honour to meet so many brave servicemen and women and be able to perform in front of them in such an important week for the Armed Forces.

Tickets For Troops provides thousands of opportunities for troops to enjoy theatre shows, sports matches, music gigs and days out with their families and friends and I am very proud to be supporting such a fabulous charity.”

Veronica Bamford, Director of Operations at Tickets For Troops said: “We are extremely proud to have been able to distribute 750,000 free tickets to our marvellous Armed Forces which clearly demonstrates the enormous support and respect our fabulous donors and UK industries have for our military men and women.

We are also very grateful to Beverley Knight for helping us mark this occasion and hope our members enjoyed watching her musical, Memphis the Musical last night in the West End.”

Sgt Major Kevin Murray, Royal Military Police who met Beverley before the show said: “It was a fantastic privilege to be in the audience for Memphis the Musical tonight, Ms Knight's warm words prior to curtain up, acknowledging her appreciation and support for HM Forces was truly humbling. She and the entire cast delivered a stellar and very moving performance. Truly outstanding.”

Beverley Knight stars as club singer ‘Felicia Farrell’ in the award-winning MEMPHIS THE MUSICAL, a role she originated in the West End. From 6 July, Beverley and the cast will be joined by recording artist Matt Cardle in the role of ‘Huey Calhoun’.

Inspired by true events from the underground dance clubs of 1950s Memphis, Tennessee, MEMPHIS THE MUSICAL (memphisthemusical.com) follows the fame and forbidden love of a radio DJ who wants to change the world and a club singer who is ready for her big break.