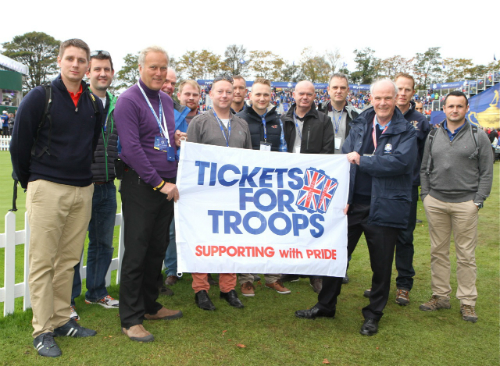 A group of soldiers were among the 45,000 spectators who enjoyed watching Europe retain the Ryder Cup at Gleneagles courtesy of The PGA.

“I think it is really important that these guys, who’ve gone on the front line for us, get a little bit back,” he said.

“I think Tickets For Troops is magnificent, I see the guys at soccer matches, and at other major events, and when you see the pleasure the guys get it’s great that The PGA and the Ryder Cup can support them in this way.”

The PGA also runs a successful Golf Buddy programme, pairing up PGA pros with injured soldiers to help them rehabilitate through golf.

“I think The PGA and golf is for everybody and we do a lot for juniors and now we’re doing something for guys who have another life which embraces everybody and that’s always been my wish.

“Golf is not exclusive, it’s very inclusive and this is proof of it.”

Lord Marland, who is chairman of Tickets For Troops added: “We are extremely grateful to The PGA, for their commitment and generosity they show towards our deserving Armed Forces.

“The Ryder Cup is one of the sporting highlights of the calendar and tickets are like gold dust so it really is just fantastic that so many servicemen and women will be given the opportunity to enjoy world-class competition in such magnificent surroundings.”