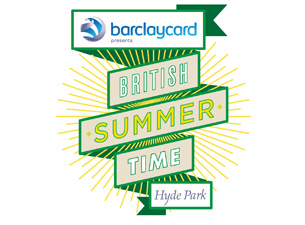 In celebration of Armed Forces Day on Saturday 29 June, Barclaycard presents British Summer Time Hyde Park are partnering with Tickets for Troops to show their support and donate tickets to serving members of the British Armed Forces, giving troops the opportunity to see some of the world's biggest names in music perform in Hyde Park this summer.

"Ticket Tuesday" which launches on 25th June as part of a week long programme of events leading up to Armed Forces Day, will allow members of the Armed Forces to apply for tickets to Barclaycard presents British Summer Time Hyde Park. Servicemen and women will be able to register for access to see Bon Jovi, The Kaiser Chiefs and Bush on 5 July; The Rolling Stones, The Vaccines and Temper Trap on 6 July; JLS, The Beach Boys, The Saturdays, The Gruffalo and Horrible Histories on 7 July; Elton John and his Band, Elvis Costello & The Imposters and Ray Davies on 12 July; The Rolling Stones, Jake Bugg and Tom Odell on 13 July or Lionel Richie, Jennifer Lopez, Chic feat.Nile Rodgers, and Al Jarreau on 14 July.  Full music line-up for these days can be found below, or on www.bst-hydepark.com.

Rob Hallett, President, International Live Touring, AEG Live, says:  "After all the armed forces do for us it is the least that we can do in return, I would especially welcome the children of servicemen who are the forgotten victims of any conflict."

Samantha Cameron, Patron of Tickets for Troops says: "I would like to pass on my warmest thanks to the organisers of the Barclaycard presents British Summer Time Hyde Park Concerts for supporting Armed Forces Day and making this very generous donation to Tickets For Troops.

It is fantastic to see that the continued level of support for Tickets For Troops remains so high. The charity provides a brilliant way to show our gratitude for everything servicemen and women do on our behalf and I hope organisations across the country will continue to get behind the scheme."

James Russell, Head of Events and Filming, The Royal Parks, says: "We have a long tradition of working with the military and holding military and ceremonial events in the Royal Parks. Tickets for Troops is a fantastic charity and we are looking forward to seeing as many of our troops as possible in Hyde Park during the concerts."