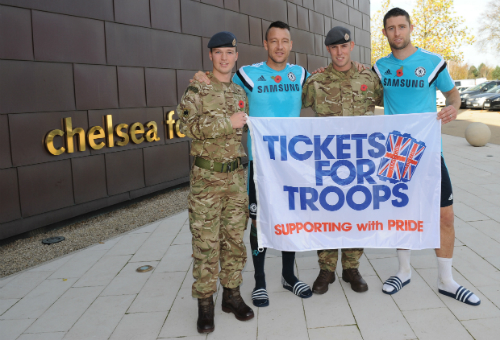 Tickets For Troops is delighted to announce a new partnership with the Barclays Premier League with all TWENTY clubs pledging free tickets to football matches in support of the Armed Forces.

Richard Scudamore, Chief Executive of the Premier League said: “The support for Tickets For Troops of all twenty Premier League clubs is a significant part of our Football Remembers celebrations, which will include a special Christmas Truce tournament for Under 12’s in Ypres, the creation of a permanent memorial at the National Memorial Arboretum and events that will bring all football fans together to honour the unique history of 1914.

“This is a very significant year in the history of our nation and football has had a prominent part in wartime, whether it was supporters and players volunteering to fight for their country or the famous football matches played in the trenches by soldiers from both sides during the Christmas Truce in 1914."

Chelsea captain John Terry, a big supporter of Tickets For Troops, said: “It’s great that the Premier League has encouraged all the clubs to support this initiative. At Chelsea we have been providing 50 tickets for every home game at the Bridge for five years and although it’s a very simple gesture it goes some way to showing our admiration and respect for these incredibly brave men and women. These amazing people serve our country and give us the opportunity to live our lives the way we do today, they are true heroes.”

Lord Marland, Chairman of Tickets For Troops said: “We are delighted that every Premier League club is showing its support for our Armed Forces in this very special year by offering tickets in this way. Their generosity recognises the sacrifices and courage of all those men and women who work on our behalf and make us so proud.”

The Remembrance initiative brings the number of free tickets offered by Premier League clubs this season to over 5,000 and a total of over 20,000 since Tickets For Troops was launched by the Prime Minister five years ago.