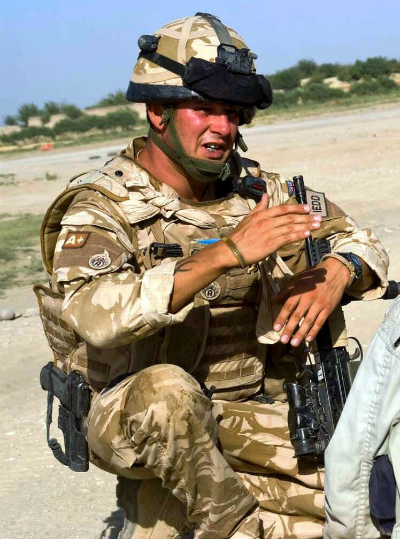 We are proud to announce that Warrant Officer Class 1 Kim Hughes GC, the 74th living recipient of the George Cross*, has become our newest patron.

Telford based, Warrant Officer Class 1 Hughes, aged 35, who is currently serving with 33 Engineer Regiment as the Regimental Senior Ammunition Technician was awarded the George Cross in 2010 in recognition of his bravery whilst on tour in Afghanistan.

During his deployment he personally disarmed 120 Improvised Explosive Devices (IEDs) and put his own life at risk by foregoing protective clothing and manually defusing bombs to save the lives of his comrades.

His gallantry citation for the George Cross was described by the Ministry of Defence as, "the single most outstanding act of explosive ordnance disposal ever recorded in Afghanistan.” Since he was awarded the George Cross in 2010, Hughes has returned to Afghanistan twice.

On his role as a Patron for Tickets For Troops WO1 Hughes said, "When I was asked I didn’t have to think twice. This is a charity who look after the service men and women who continue to put their lives on the line, are drawn onto duty at a moment’s notice and who spend long hard weeks and months away from their families and friends.

“Having served for 18 years in the Army and spent many months moving around the UK and away on tour, I along with many members of the Armed Forces are grateful for the kind generosity of the donors across the UK, giving us the opportunity to attend events free of charge. Therefore I would like to take this opportunity to thank all those involved for supporting the Armed Forces.”

Tickets For Troops Director of Operations, Veronica Bamford said  “As one of the Armed Forces bravest and most gallant soldiers, we are extremely honoured to have WO1 Hughes on board as a Patron. Kim is one of the many heroes who serve our country on a day to day basis and we are very proud that he will be representing the military through his support for Tickets For Troops.”

*The George Cross is awarded to civilians and military personnel who have displayed the greatest heroism or the most conspicuous courage in circumstances of extreme danger.