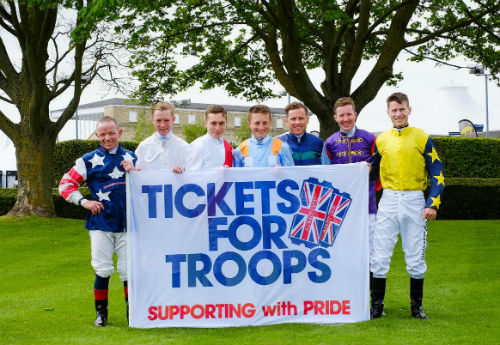 55 British racecourses have in total donated more than 50,000 free tickets to the British Armed Forces through Tickets For Troops.

On Friday 13th May seven jockeys including Jimmy Quinn, Luke Morris and Pat Cosgrave marked this phenomenal milestone with a photo in the parade ring at Newmarket Racecourse, Suffolk to thank all the supporting racecourses across the UK.

Since Tickets for Troops launched in 2009, a staggering 50,000 tickets have been donated by racecourses.

In partnership with the British Horseracing Authority, Tickets For Troops has been supported by 55 racecourses from all over the UK including Ayr, York, Chepstow and Newmarket.

Steve Harman, Chairman of the British Horseracing Authority said: “It is great to see British racecourses coming together to achieve such a big milestone for this fantastic charity. Well done Tickets For Troops!”

“Many of Racing’s constituents support UK military charities, and we will continue to do so. It is so important that we in Racing give to those serving soldiers and veterans who make such an enormous contribution to our country, a contribution for which we are forever thankful.”

Racecourses donate free tickets to the charity for their regular and Premier race days throughout the year including The Grand National Opening Day at Aintree, Royal Ascot and The Open at Cheltenham.

“We are delighted to be able to offer troops the opportunity to come and enjoy the racing at Ascot. It is our chance to give something back and we are proud to support such a fantastic cause.”

Veronica Bamford, Director of Operation at Tickets For Troops said:

“We are extremely proud to be marking such a huge milestone today. The British horseracing community are long-term supporters of the charity and we are extremely grateful to them for providing 50,000 opportunities for our troops to enjoy race days across the UK with their families and friends to reward them for their service to our country.”