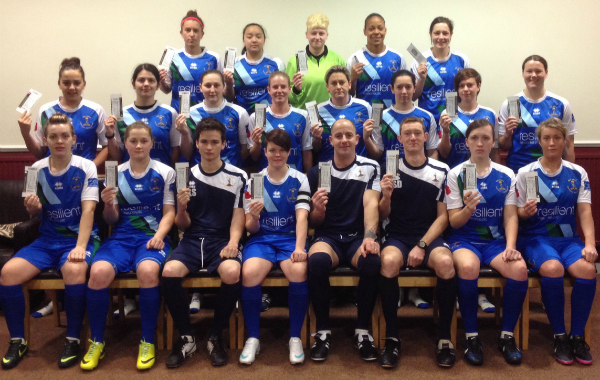 ENGLAND WOMENS FOOTBALL can expect a warm welcome from servicewomen who play for the Royal Corps of Signals Ladies Football team for their fixture against the USA.

The FA have yet again supported UK service personnel by donating hundreds of tickets to the game at MK Dons home ground, stadium:mk. The match against USA is part of England's preparation for this summer's FIFA Women's World Cup, which will take place in Canada.

Amongst those watching will be 25 Female Communication Specialists who play football for the Royal Corps of Signals Ladies Football team, one of seven female teams within the British Army.

Cpl Samantha Rodway (Captain) Royal Corps of Signals Ladies Football Team said: “Firstly, on behalf of the team, I would like to thank Tickets for Troops for giving us the opportunity to watch the England Women's team. Corps Women's football has become vastly popular and is improving from season to season. It allows us the chance to escape from our hectic work schedules and operational commitments. We wish the England Women's team every success in tonight's fixture along with the World Cup and hope they can bring the trophy home.”

England Womens defender, Alex Scott said: "It's great to hear the troops will be at the game and that the FA is supporting such a good cause. I hope we can make them as proud as they make us."

Veronica Bamford, Director of Operations at Tickets For Troops said “Women’s football has substantially grown within the Forces over the last couple of years and this fixture provides the perfect opportunity for servicewomen to watch their favorite players in action ahead of the FIFA Women’s World Cup.”