ENGLAND TO PLAY IN FRONT OF NATION’S HEROES 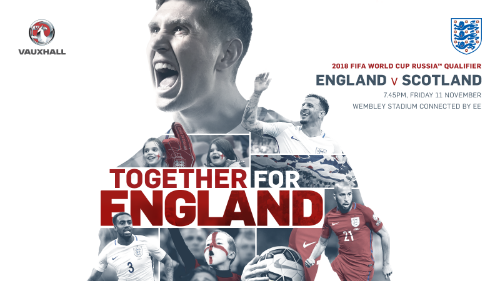 The Football Association has once again demonstrated their respect for our British troops by providing 1,500 free tickets to service personnel for England v Scotland and England v Spain through their ongoing partnership with Tickets For Troops.

As part of their support of HM Armed Forces, The FA will host 500 soldiers, sailors and airmen and women and their families on 11th November for their Armistice Day fixture against Scotland.

A further 1,000 tickets have also been donated as England take on Spain on 15th November at Wembley Stadium connected by EE.

Interim England Manager, Gareth Southgate said: "It is important that we continue to recognise the role the Armed Forces play in protecting our freedom.

“While at this time of year we stop to remember those who have made the ultimate sacrifice, it's equally as important to acknowledge those who currently serve our country.

“If The FA’s partnership with Tickets for Troops is a small way of rewarding our brave servicemen and women then that is only a good thing.”

Director of Operations at Tickets For Troops, Veronica Bamford said: “We are delighted that The Football Association continue to recognise the brave men and women who serve our country by inviting them to Wembley where they can enjoy their well-deserved time-off with their families and friends and watch England play.”