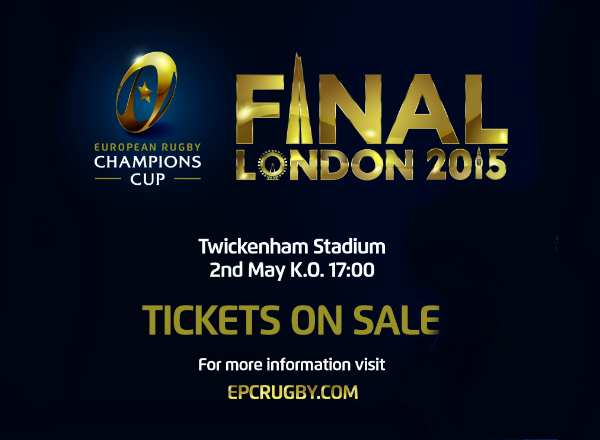 1. HISTORY IN THE MAKING
RC Toulon could become the first club in European rugby history, and only the second in the world game, to win a hat-trick of elite titles. They are in line to match the great Crusaders team of 1998-2000 who won the SuperRugby title three times in-a-row.

4. CENTRES OF ATTENTION
Wesley Fofana, Jonathan Davies, Mathieu Bastareaud and Matt Giteau will be fighting out a world-class midfield battle at Twickenham – worth the admission price on its own!

5. FAREWELL TO GIANTS OF THE GAME
World Cup-winners, Bakkies Botha and Ali Williams, as well as Toulon captain, Carl Hayman, will be playing in their last European game before hanging up their boots at the end of the season

6. NIGEL OWENS IS IN CHARGE
One of the world’s best referees, Nigel Owens, will be in charge of a record-breaking fourth European Cup decider. When he was in the middle at Twickenham in March, there were 90 points and 12 tries in the England v France 6 Nations game.

7.       REVENGE
Clermont, who have never won the European club rugby’s elite title, will be seeking revenge after losing to Toulon in the 2013 decider. They will also want to put right what happened on their last visit to Twickenham in last season’s semi-final when they were lost 46-6 to Saracens.

8.       WORLD CUP WARM-UP
The Champions Cup showpiece is the first of three major finals to be staged at Twickenham Stadium this year. Saturday week’s occasion will get fans in the mood for the Aviva Premiership final at the end of May and the 2015 World Cup final on 31 October.

9. WELSH RIVALRY
Only nine Welsh players have won European Cup winners’ medals. There will be a 10th as Jonathan Davies of Clermont will be facing Toulon’s Leigh Halfpenny at Twickenham.

10. WORLD CLASS RUGBY
The inaugural Champions  Cup final will be another thrilling occasion. Great players, major rivals, historic targets and the biggest club rugby title in the world on the line.

Enter the ballot here for your chance to win two tickets:

Or if you can’t wait to find out if you’ve one you can purchase tickets here: tft.link/EuroRug