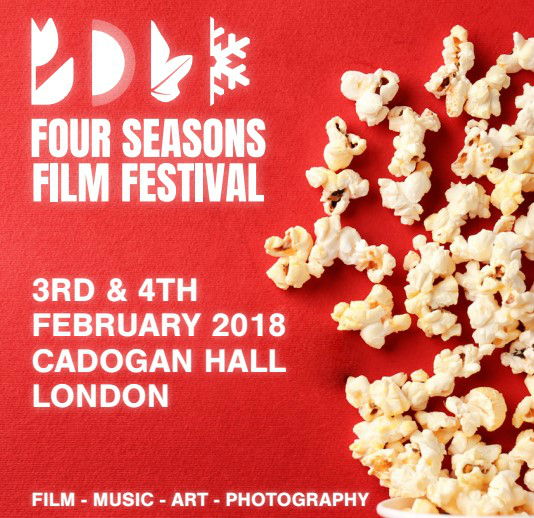 Four Seasons Film Festival arrives this Febuary - a new film festival for London, taking place at Cadogan Hall on Saturday 3rd and Sunday 4th, it celebrates the best in independent film making and the arts.

We are delighted to announce the opportunity for our members to attend the inaugural Four Seasons Film Festival. With a range of ticket types offered there is something for everyone to enjoy. Too see the full list of tickets available see the bottom of the page.

The festival will showcase the full spectrum of human emotion and endeavour, in a series of ground-breaking and inspiring feature films, short films and documentaries that exemplify the moods of the annual seasons.

With hundreds of submissions received from more than 40 countries world wide, the full festival programme is scheduled with nine feature films and over 60 short films to be screened over the first weekend in Febuary.

The festival line up also includes live music, art and photography from inspirational up and coming artists, all within the beautiful setting of the historic Cadogan Hall in Sloane Square, London.

Designed around the annual seasons, the 9 feature films reflect the changing moods and attitudes of the seasons. To which end the weekend has been split into four, allowing visitors to explore the messages of new beginnings, joy, change and truth.

As well as the individual tickets to see the feature films from the different seasons we have also been donated passes for members to enjoy the whole festival;

Weekend Pass: For admittance to all four seasons, all eight feature screenings, the short film selection, art and photography exhibitions and live music performances for the whole weekend.

Saturday Pass: Access to the four feature screenings under the Spring and Summer categories as well as the short film selection; art and photography exhibitions and live music performances on Saturday 3rd February.

Sunday Pass: Access to the four feature screenings under the Autumn and Winter categories as well as the short film selection; art and photography exhibitions and live music performances on Saturday 4th February.

Summer Screening 1: One Year On a Bike Stalls

Summer Screening 2: At the Drive-In Stalls

For more information on the festival, visit: www.fourseasonsfilmfestival.com

To book your tickets through Tickets For Troops, click here: tft.link/4SeasonsFF