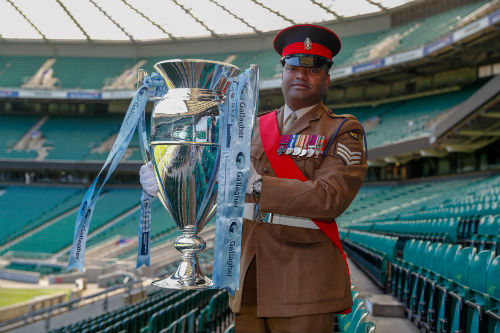 PREMIERSHIP RUGBY and Tickets For Troops are delighted to announce that 1,000 members of the British Armed Forces and their families will be honoured guests at this year's Gallagher Premiership Rugby Final at Twickenham on 1st June.

Following the confirmation of a partnership between Premiership Rugby and Tickets For Troops the Forces personnel will be at HQ for the biggest day in the English club rugby calendar.

“There is an unbreakable bond between rugby union and the British Services so we are looking forward to having a significant group of current Service personnel and their families with us at Twickenham on 1st June to watch the crowning of the 2019 Gallagher Premiership champions," said Premiership Rugby's Chief Executive, Mark McCafferty.

“We have a long-standing tradition of seeing serving personnel carry out the Premiership Rugby trophy and we are delighted to know hundreds of their colleagues will be able to witness it live this year.”

Lord Marland, the Chairman of Tickets For Troops, which marks its 10th anniversary later this year, said: “Rugby has been a massive supporter of Tickets For Troops since we launched and it is fantastic that Premiership Rugby has maintained this level of generosity, especially for such a prestigious event and at the greatest rugby stadium in the world. We are both delighted and grateful for their support.”