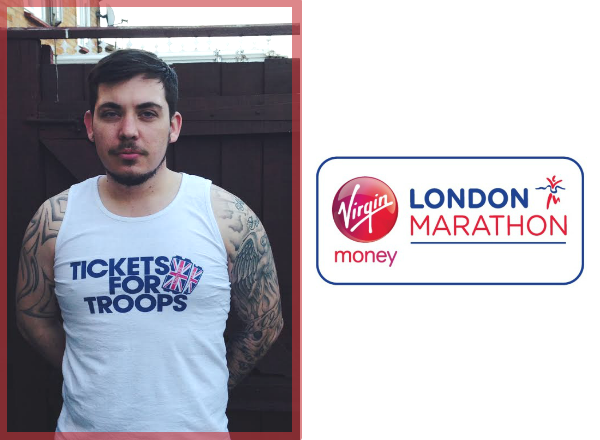 Gary Green was injured in Afghanistan in 2009 by two Improvised Explosive Devices concealed in the side of a compound wall which left him blind in his right eye. Since leaving the Armed Forces, Gary has found it very difficult to adjust back to a civilian lifestyle and has suffered with severe PTSD.

Gary is looking forward to running the the Virgin Money London Marathon and said on being offered the place: “I am fit and keen and I would love to run the London marathon for [Tickets For Troops] and add it as one of the positive focuses in my life.”

Gary is currently writing a book about his experiences of the difficulties of war, pre, during and post operation which includes giving lifesaving first aid to an 8 year old child who lost both of his legs in an explosion, insight into his own injuries, the struggles of adjusting to life outside the army and his personal transformation of turning his life around.

During his training, Gary ran the hilly Banbury 15 in 2hrs 26 mins which he described as a big struggle, but has since run a half marathon without much difficulty which gave him a big confidence boost.

On the race he said: “I am going to take the run quite steady as I feel it's more important to focus on the end result rather than trying to sprint through the whole thing."

Please help get Gary to his fundraising target, and donate now: tft.link/GaryGreen