HEADLEY COURT PATIENTS GET BEHIND ENGLAND 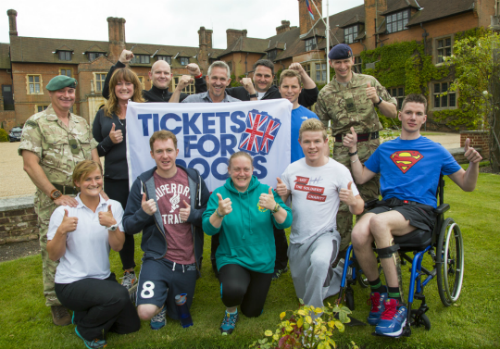 PATIENTS and staff from the Headley Court recovery centre will be amongst hundreds of troops in the crowd at Wembley Stadium to cheer England on for their Euros qualifier against Switzerland on Tuesday night (8th September).

The FA are once again getting behind our country’s Armed Forces and offering them the opportunity to support their football heroes through Tickets For Troops.

Troops will be heading to Wembley Stadium  from all corners of the UK including staff and patients from the Defence Medical Rehabilitation Centre, Headley Court, near Leatherhead, Surrey.

Ex-England legend and Match of the Day presenter and Tickets For Troops patron, Gary Lineker visited patients at DMRC Headley Court earlier this year where he spoke to troops about his football memories.

He said: "I was overwhelmed by the personal stories of those remarkable people I met as well as the dedication and skills of the staff. ‎It's fantastic that The FA has been so generous in their consistent support for Tickets For Troops."

WO2 George Dent, Royal Marine and Military Liaison Officer at Headley Court said “Both patients and staff here at Headley Court had a great day with Gary. He gave them a huge insight into his career and spoke to the guys about their military journeys.

"His visit gave our patients a real morale boost. We have a large contingent of football fans here and they will all be cheering on our boys on Tuesday thanks to the FA and Tickets For Troops.”

Veronica Bamford, Director of Operations at Tickets For Troops said “The FA have once again pulled out all the stops for our fabulous troops. We are extremely grateful to them for enabling our national team to be cheered on by our nation’s true heroes”