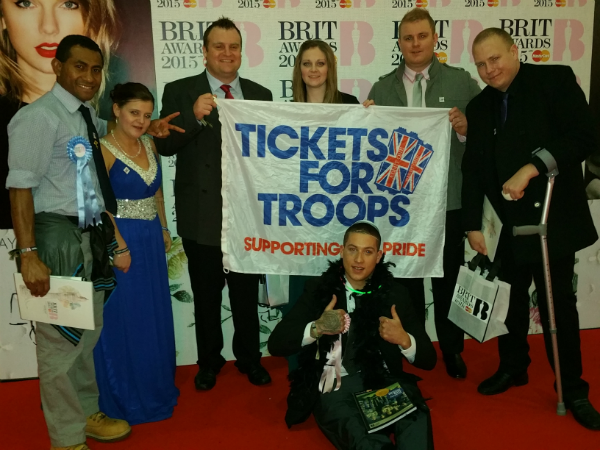 TEN of the 200 tickets donated to Tickets For Troops by BPI for the BRIT Awards 2015 with Mastercard were offered to injured service personnel.

Military patients from the Defence Medical Rehabilitation Facility at Headley Court were given tickets to the prestigious awards ceremony and after show party through military charity Tickets For Troops.

Gunner Cottrell said: “I would like to give a huge thank you to Tickets For Troops for making it possible for the Headley Court patients including myself, to attend such an exciting event. Seeing so many star performers was really special.”

Senior Aircraftman Michael Williams 27, from Aylesbury in Bucks, currently serving at RAF Marham.said: “I was not going to miss such a high-profile event and was delighted to have been able to attend the BRIT AWARDS thanks to the tremendous support we receive from Tickets to Troops. Being at such an enjoyable event is the perfect end to a hard day’s rehab at Headley Court!”

Norfolk based music fan, Sergeant Stephanie Wright of BSW, RAF Marham said “I would like to thank the donors. The tickets available bring friends closer and most definitely boost morale”.

The BRIT Awards team were extremely proud to be able to support our nation’s brave service men and women and will be looking to visit DMRC Headley Court later in the year.