Let It Be Armed Forces Day AT The New Theatre Oxford 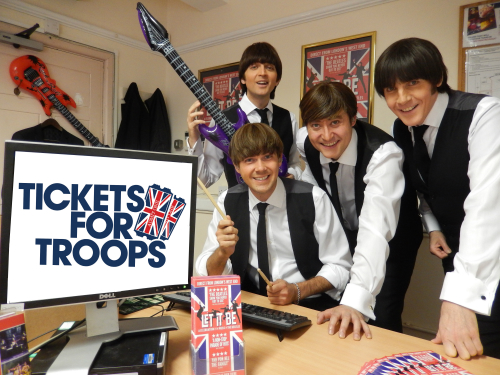 In celebration of Armed Forces Day, the New Theatre Oxford and the producers behind ‘Let It Be’ have paid tribute to the British Armed Forces community for their hard work, dedication and efforts by offering them 200 tickets, through Tickets For Troops, to the five-star musical, Let It Be.

On Saturday 25th June, 200 troops and their guests will have the chance to attend either a matinee or evening performance of Let It Be in Oxford thanks to the incredible support of the New Theatre Oxford and the producers of Let It Be.

This spectacular show jam-packed with over 40 of The Beatles greatest hits has come direct from the West End and celebrates the legacy of the world’s greatest rock ‘n’ roll band.

The producers of Let It Be said: “Let It Be are proud to support Tickets for Troops and it is particularly special to be able to do so on Armed Forces Day. We’d like to take this opportunity to thank the troops, reservists, veterans, cadets and their families for their dedication and service.”

Director of Operations at Tickets For Troops, Veronica Bamford said: “Armed Forces Day provides an opportunity for organisations across the UK to recognise the courage, sacrifice and commitment our brave servicemen and women offer to our country and it is absolutely wonderful that the producers of Let It Be and The New Theatre are getting behind our troops on this very important day.”