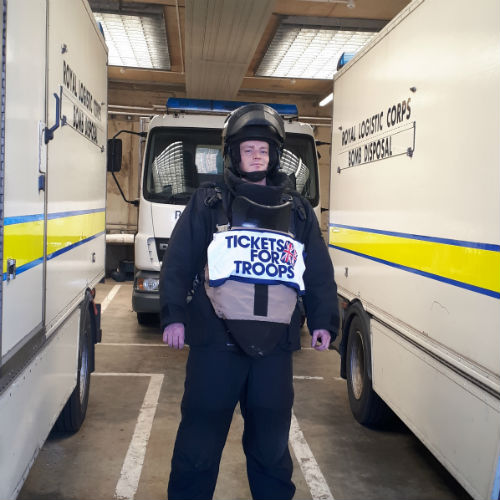 Doug, 35, from Bromley in Kent, who is serving as a Staff Sergeant with the 11 Explosive Ordnance Disposal Regiment, plans to wear the 30kg (66lbs) bomb disposal suit, which is made of Kevlar – a heavy type of body armour used in Iraq and Afghanistan - for the 26.2mile route on Sunday, April 28th.

He is one of twenty-eight members of the Armed Forces – twenty two men and four women -who are running the marathon to raise funds for the military charity Tickets For Troops (www.ticketsfortroops.org.uk)

They are all based in the London district and their regiments include the Coldstream Guards and The Royal Logistics Corps.

Doug Fitzsimon said: “For those in the bomb disposal community, they know how difficult and hard work it is in the bomb suit just to even complete just a simple task much less a marathon! I am very fortunate to have a fantastic support team assisting me.  I could not achieve this by myself.  They will ensure I stay hydrated, help me with regular breaks to cool down my body temperature, provide motivation when my body disagrees, and keep a safe eye on me throughout. “

Although he has completed marathons in Manchester, Brighton, Liverpool and Washington he is hoping to establish a new record for the Guinness World Record by completing a marathon in a full suit.

William Campbell-Lamerton, Director of Operations at Tickets For Troops said “We really appreciate all the efforts made to raise fund for us but this is really going beyond the call of duty. We are very, very grateful for Doug’s superhuman efforts and wish him the best of luck on his run.”

You can support Doug by donating at tft.org.uk/DougFitz2019