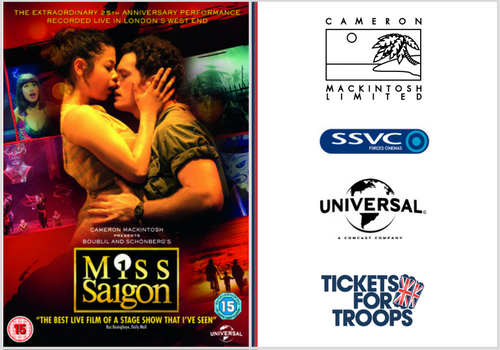 In partnership with Universal, Cameron Mackintosh and SSVC Cinema, we are excited to bring you 25th Anniversary Performance of Miss Saigon, recorded LIVE in London’s West End and delivered to troops in SSVC cinemas in Chicksands and Akrotiri.

For more information on the location and listings then please visit forcescinemas.com/chicksands

For more information on the location and listings then please visit forcescinemas.com/akrotiri

In the final days of the US occupation of Saigon, American GI Chris is bought the services of 17-year-old war orphan Kim for one night. Both are reluctant participants in this enforced tryst, yet that night is the trigger for a tragic story that spans continents and changes lives forever.

Since its London premiere in 1989 Miss Saigon, which is based on Madame Butterfly and features music by the duo behind Les Misérables, Alain Boublil and Claude-Michel Schönberg, has been seen by more than 35 million people in 300 cities across 28 countries and in 15 languages, collecting 40 awards in the process.

This new production, created a decade ago to enable greater touring, features a recently written new song, Maybe, which has previously only been performed in Dutch and Japanese productions. The famous score also includes numbers such as The Heat Is On In Saigon, Sun And Moon and This Is The Hour.