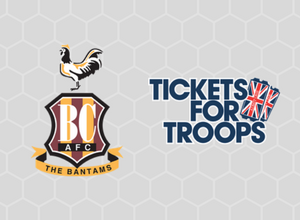 MK Dons’ Sky Bet League One clash with Bradford City at Stadium MK, has been designated as the Club’s annual Armed Forces Day.

The match will take place on Saturday 7th October. Kick-off is at 3pm.

The match has been designated as the Club’s Armed Forces Day, which means current serving members of the armed forces can attend for FREE.

Serving members of the Armed Forces will need to provide valid ID at the time of purchase. As a result, these tickets cannot be purchased online.

As part of their Armed Forces Day plans, MK Dons are actually looking for any members of the Armed Forces with Bradford City connections to be involved in a half-time parade.