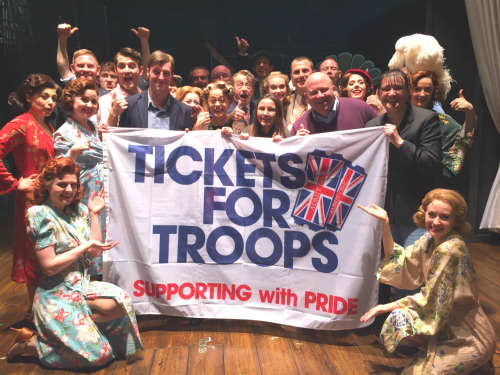 On Thursday 14th April, 10 troops and their guests took to their seats at the Noel Coward Theatre to enjoy the new musical production of Mrs Henderson Presents, based on the much-loved film starring Judi Dench. The show, which is directed by Tony Award Winner Terry Johnson, has been described as ‘a triumph’ and ‘a winner.’

After the show, the troops, along with their guests, were given the chance to meet the cast which includes Olivier-Award Winner Tracie Bennett (Les Misérables, End of the Rainbow, ITV’s Coronation Street), and Oliver-nominated stars Ian Bartholomew and Emma Williams.

Tickets For Troops member, Staff Sergeant Scott Mackie: “The show was brilliant and I now want to take my family to see it with me. Thank you so much to the team at the theatre, we were very well looked after and getting to meet the cast after the show made me feel very special. It is opportunities like this that make us feel appreciated and valued for the work we do.”

Producer Michael Harrison said: “We’re delighted to have been able to invite some of the Armed Forces to see Mrs Henderson Presents. Mrs Henderson herself was a passionate believer in entertaining the troops during the Second World War, refusing to close The Windmill Theatre even during the Blitz, and it’s an honour to be able to continue that tradition.”

Director of Operations at Tickets For Troops, Veronica Bamford said: ‘The ambition of Mrs Henderson to boost morale during the Second World War parallels with the purpose of Tickets For Troops as we continue to recognise members of our marvellous Armed Forces by offering them a small token of our appreciation through tickets for events to ensure that they can enjoy their precious time off with their family and friends.”