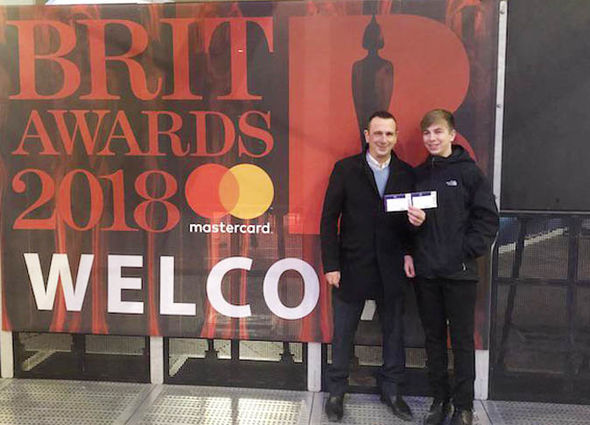 The military charity Tickets For Troops is celebrating giving away ONE MILLION tickets to the UK’s Armed Forces since it was launched nine years ago.

The significant milestone was reached earlier this week when Flight Sergeant John Spanton and his son, Alfie, aged 13 were amongst two hundred members attending the prestigious BRITS Music Awards at London’s O2 Arena.

In recognition of the achievement Air Chief Marshal Sir Stuart Peach, Chief of the Defence Staff, hosted a special reception at the Ministry of Defence for representatives of those generous organisations which had donated tickets and those who had received tickets through the scheme.

Sir Stuart said: “On this landmark occasion, I want to pay tribute to everyone connected with Tickets For Troops. Their generosity is welcome recognition of the work and sacrifice of our armed forces and is appreciated by those who serve.”

The Secretary of State for Defence, Gavin Williamson said: “Tickets For Troops has been a real success story - giving back to our courageous, dedicated and loyal service personnel.

“I want to congratulate all those involved on reaching this magnificent milestone. Britain’s Armed Forces are the finest in the world and we owe them greatly for their commitment to this country and for keeping us safe every hour of every day.

“We should never underestimate the work that brilliant charities like Tickets For Troops do - making a significant difference to the lives of the bravest and the best.”

Former Prime Minister, David Cameron, who launched the charity in November 2009 paid his own tribute. "Huge congratulations to all involved at Tickets For Troops for reaching this amazing milestone, donating their one millionth ticket. This is a fabulous achievement and makes me incredibly proud as one of the original backers of this exciting initiative.

"Having helped launch the charity back in 2009 and supported it ever since, I have seen first hand the positive difference the charity makes to our brave servicemen, servicewomen - and, crucially, their families, whose love and support mean so much on the frontline.

"It has been a pleasure to see the charity flourish over the years - with more and more sports and entertainment venues, teams and personalities generously donating tickets. It serves as a small, but important way in which we can recognise the incredible work, tireless dedication, and endless courage of our armed forces and the sacrifices that they and their families make.

"So well done to all involved and thank you to everyone who has donated tickets over the years and helped support the charity. I look forward to the next million tickets being donated and enjoyed by our brave troops - after all, they do so much to keep us safe, we have a duty to recognise that, show our gratitude, and give something back.”

Lance Sergeant Johnson Beharry VC said: “Having attended the launch of Tickets For Troops all those years ago I could never have imagined the success the charity has achieved especially reaching the million tickets milestone. I know the armed forces really appreciate the efforts of Tickets For Troops but there should also be significant recognition and gratitude to all those organisations, theatres, sports clubs and governing bodies which have been so consistently generous.”

The Chairman of Tickets For Troops, Lord Marland said: “When we started Tickets For Troops none of us thought we would be giving our one millionth free ticket. This shows the respect and affection with which our troops are held. It importantly demonstrates the incredible generosity of all those who have given free tickets to such a variety of events and the group of people who have made this charity such a success. This event is a huge thank you to them.”

Gary Lineker, who also helped and attended the original launch of Tickets For Troops, said: “Tickets For Troops is such a simple idea but it appears to have attracted an increasing wave of support over the years which has made it more and more successful. It’s great that we are respecting and understanding exactly what our armed forces do for us and the amazing sacrifices they make for our country on our behalf. To have given away a million tickets over this time is unbelievable and a tribute to all the amazing donors who have given tickets and made our troops feel special and recognised. Long may it continue.” 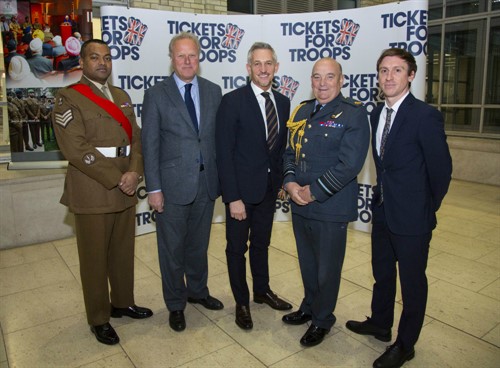 Actress and TV presenter Joanna Lumley, a long-standing supporter of Tickets For Troops said: “It is nothing short of fabulous that Tickets For Troops is celebrating its millionth ticket. Think how much happiness this sensational charity has brought to the most deserving and courageous people amongst us, the armed forces. Bravo to everyone involved.”

Former SAS hero and best-selling author Andy McNab said: “Tickets For Troops has done the most fantastic job in recognising all the work our armed forces do at every level.  It’s a simple gesture but I know what a massive difference it makes to all those serving and their families.”

Hundreds of organisations and individuals have supported Tickets For Troops including The FA, The Premier League, The Aviva Premiership, The LTA, British Athletics, British Horse Racing as well as theatres and concert venues all over the country and stars such as Sir Paul McCartney, Sir Elton John, Sir Rod Stewart, John Bishop, John Terry and Lewis Hamilton.

The millionth ticket holder, Flight Sergeant John Spanton, who works with No 1 Air Mobility Wing at RAF Brize Norton said: “Tickets For Troops is an amazing charity because it gives servicemen and women and their families the opportunity to see some great acts and sports events and it’s a great way for the nation to show its appreciation.”