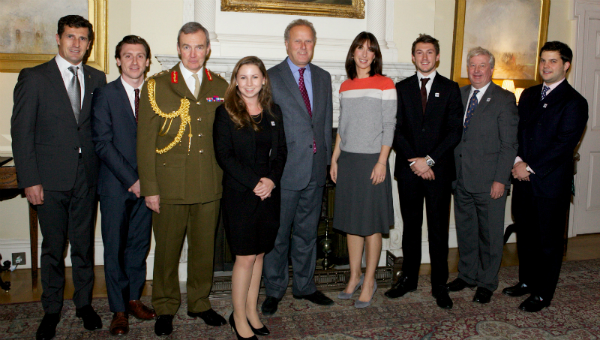 Samantha Cameron, Founding Patron of the Tickets For Troops, has hosted a reception for the charity at No.10 Downing Street to mark the fifth anniversary of the charity.

Tickets For Troops has gone from strength to strength offering hundreds of thousands of free tickets to events all over the UK to serving members of the Armed Forces and for those who have been medically discharged since 2001. 650,000 tickets have been allocated to our nation’s heroes demonstrating the enormous support and respect our UK sports, music, theatre and entertainment industries have for our military men and women.

Samantha Cameron, Patron of Tickets For Troops said “It is a real pleasure to host Tickets For Troops’ 5th Anniversary at Downing Street. It is so important to give something back to the amazing men and women who give so much to keep our country safe. Tickets for Troops have done an amazing job in allocating 650,000 tickets, and it is wonderful to see the wide range of industries who are supporting our servicemen and women.”

Founding Patron Gary Lineker said: "I am really proud to have played a small part in the setting up of Tickets For Troops five years ago. The football family has shown fantastic support by offering tickets to members of the Armed Forces for international matches and games at all levels. I know it means a lot to these brave men and women and long may it continue."

CEO of Universal Music, David Joseph said: “Tickets For Troops is a great idea which the music industry has been united behind since day one. We’re proud to continue our support.”

Nick Allott OBE, Managing Director of Cameron Mackintosh said: “Coming from a military family and working in the performing arts, I was thrilled to get involved in Tickets For Troops five years ago.  I have watched the charity grow from small beginnings to the substantial and successful organisation it has become.  We all owe a huge debt to our service families and all of us in live theatre throughout the UK are committed to repaying that any way we can.”

Lord Marland, Chairman of Tickets For Troops said: “The scale and continued generosity of people supporting our charity is unbelievable. Our commitment to the troops has struck a chord with those in the entire entertainment and sports community and we are proud to be able to deliver a service to them on behalf of our donors. You only have to speak to the ticket recipients to understand how much these opportunities mean to our marvellous troops.”

WO2 (QMSI) Steven Waterman of the Royal Engineers said: "We have had some fantastic days out all thanks to the commitment and dedication of those who work tirelessly behind the scenes at Tickets for Troops on behalf of all within the Service Community. The support by TFT as well as the donors, acts and venues is mind blowing and really makes you feel appreciated as a serving member of HM Forces.

The family also feel the same, they feel a real sense of pride when attending events knowing that their dads’ hard work away from home means they get the special treats and days out."