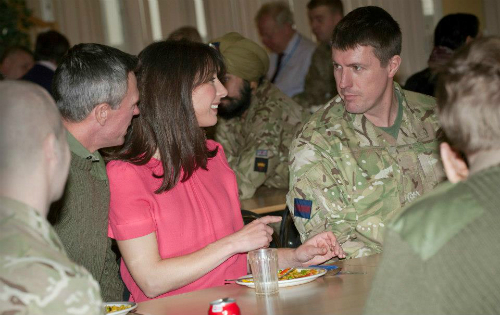 Tickets For Troops Ambassador Samantha Cameron paid tribute to servicemen and women, as the charity offers tickets for the Brit Awards

Today (Monday 28th January) Samantha Cameron visited the Wellington Barracks in London to present soldiers with tickets for The Brit Awards, on behalf of the charity.

Mrs Cameron joined soldiers for lunch before awarding tickets to those servicemen and women nominated by the station commander, Major Alexander Spry, for their immense dedication and bravery.

Samantha Cameron said: "It is such a privilege to meet these young men and women who have been so courageous in the line of duty and are so proud to serve their country.

"I am honoured to be an Ambassador for Tickets For Troops- a brilliant charity that works to give a little back to those who give so much."

The BRIT Awards Limited has been a huge supporter of the charity providing 200 tickets for each show since 2010.