World Premiere: A brand new restoration of The Dam Busters 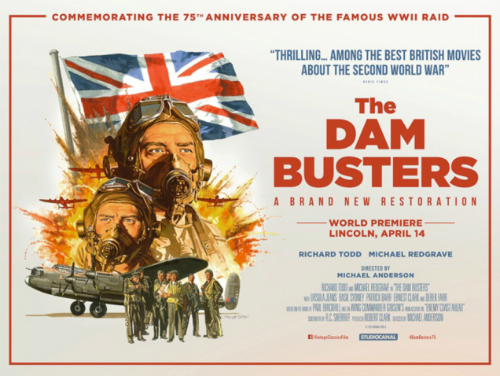 A brand new restoration of The Dam Busters will premiere as one of the Official Opening events for Lincoln’s International Bomber Command Centre on Saturday April 14th. STUDIOCANAL have kindly offered a limited number of tickets to our members.

With 2018 marking the 75th anniversary of the Royal Air Force’s most daring operation of World War II, STUDIOCANAL is proud to partner with The Luna Cinema, the UK’s leading producer of open air cinema, to screen the new The Dam Busters restoration for the first time at the International Bomber Command Centre in Lincoln, barely 7 miles from where the planes took off that fateful night.

During the Second World War, Lincoln became unofficially known as ‘Bomber County’. It was home to a third of all bomber command stations and, due to the area's flat geography, lent itself perfectly to runways and airstrips.

RAF Scampton was the base for 617 Squadron, famously referred to as The Dambusters following their daring mission to destroy a vital trio of Germany’s dams in 1943. Lincoln Cathedral was the last British landmark the squadron saw as they took off on their mission, making the nearby International Bomber Command Centre a suitably fitting venue in which to unveil the premiere of the restored film. The £12.5 million Centre opened in January to commemorate those who served and supported Bomber Command and recognising the significant contribution of Lincolnshire to the outcome of WWII.

Enter the ballot through Tickets For Troops: tft.org.uk/DamBusters