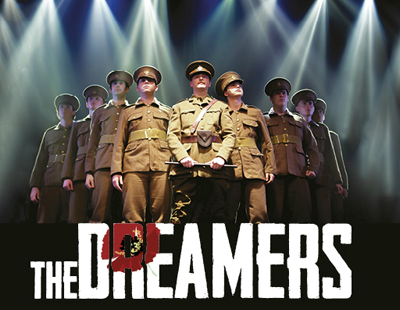 Based on the true story of a WWI hero, new musical The Dreamers makes its London debut at the St. James Theatre this summer.

As Captain Salomons prepares his men for battle, one soldier grows jealous of his popularity and position, and unsettled by what lies ahead tries to stir trouble amongst the men. A 12-year-old boy is desperate to join 'the great adventure'. Women take on the jobs of men. The War Cabinet is faced with impossible decisions.

This emotional tale of courage and sacrifice looks at the outbreak of war through the eyes of the soldiers and the families they left behind, and remembers a lost generation whose dreams were swept away.

The show is performed by six-piece band Virgin Soldiers and a cast of 22 young men and women. The story of the Great War is brought to life by on-screen narration from special guests Amanda Redman, Tim Rice, Philip Glenister and others.

Dee Kirkwood, Producer of The Dreamers, said "The Dreamers commemorates all the men, women and children who sacrificed their lives during the First World War and we are delighted to be able to offer these tickets to the current generation of young men and women who continue to serve our country."

Veronica Bamford, Director of Operations at Tickets For Troops said “As we continue to mark the centenary of WW1, we are extremely grateful to the producers for inviting so many of our marvellous service personnel, including patients from DMRC Headley Court to the Gala performance of The Dreamers.”

Book your tickets now for the Gala performance and after show drinks reception hosted by two of the shows on-screen narrators, Amanda Redman and Sylvia Syms.