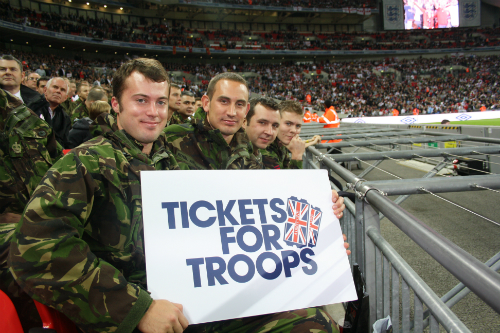 The England football team will receive vital support from the men and women of the UK's Armed Forces for their two crucial World Cup Qualifiers against Montenegro tonight (Friday) and Poland on Tuesday, it was announced today. Hundreds of free tickets have been given to servicemen and women for the fixture as part of the ongoing partnership between The FA and the military charity,Tickets For Troops.

With the help of The FA's support, over 85,000 football tickets, including international and national league fixtures, have been donated to the charity since 2009 and last year alone saw more than 35,000 tickets donated to the scheme for football matches across the country.

FA Chairman Greg Dyke said: "We are delighted to be welcoming our servicemen and women to Wembley once again for the visits of Montenegro and Poland as a continuation of our long-term partnership with Tickets For Troops. It should be a terrific atmosphere for both games and I am sure no one will shout louder for the team. We are very grateful for the passionate support we get from all fans every time England play. It really does make a difference."

In total 415,000 tickets, worth an estimated £15 million, have been distributed by the charity to service personnel over the past 4 years. Members of the Armed Forces and those who have been medically discharged from the services since 2001 can book tickets via the charity's website www.ticketsfortroops.org.uk

Tickets For Troops Chairman, Lord Marland,said: "Tickets For Troops has seen overwhelming support from organisations across the UK but The FA's generosity since the scheme was established in 2009 has been exemplary. We are truly grateful for their on-going support of these brave men and women who too often make huge sacrifices to protect our safety."