THE FA GIVES SERVICEMEN AND WOMEN A DOUBLE SALUTE 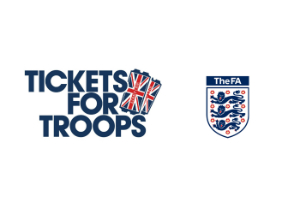 We have provided tickets for this Sunday's (11th August) FA Community Shield and next Wednesday's (14th August) international fixture between England and Scotland.

Tickets have been extended to soldiers, sailors and airmen thanks to the on-going partnership between The Football Association and Tickets For Troops.

Since the charity was set up in 2009 the FA have continually donated 500 tickets for all England Internationals at Wembley Stadium. Tickets have also been gifted to troops for a host of additional games at the national stadium, including Cup Finals and previous Community Shield (Charity Shield) fixtures.

In addition to the FA's generosity, the Association's new 'Charity Ticket Donation' facility, which enables Club Wembley members to donate their tickets to Tickets For Troops, has had an extremely positive response with hundreds more tickets being donated to the scheme for number of fixtures.

To date The Football Association has gifted almost 20,000 football tickets to servicemen and women, via Tickets For Troops.

A spokesman for The FA commented: "The Football Association are long-term supporters of Tickets for Troops and we're delighted that members of our armed forces can enjoy the start of a brand new season with The FA Community Shield at Wembley on Sunday."