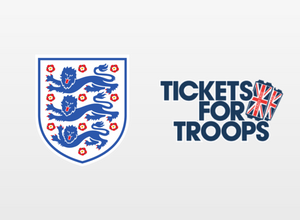 MEMBERS of the UK’s Armed Forces will be able to cheer on England’s World Cup heroes when they play Spain in UEFA’s new Nations League competition at Wembley Stadium on Saturday in their first match since reaching the semi-finals in Russia.
As part of the long-standing partnership between The FA and the military charity Tickets For Troops (www.ticketsfortroops.org.uk) troops have been allocated 500 tickets for the sell-out match, which kicks off at 7.45pm. In addition The FA have also offered the opportunity for troops to attend the Switzerland match, which sees the Three Lions travel to Leicester City's King Power Stadium on Tuesday 11th September.

The Three Lions and coach Gareth Southgate are certain to receive a rousing reception after losing to Croatia 2-1 in the semi-finals of this year’s FIFA World Cup.

A spokesperson for The FA: “England’s performance at the World Cup united the nation and proved to be an inspiration for many so it will be great to welcome the Three Lions back to Wembley for the game against Spain. We are also delighted to welcome members of Britain’s UK’s Armed Forces to the match as part of recognising the significant contribution to keeping our country safe and secure.”

Tickets For Troops Chairman Lord Marland  said: “We are grateful for all the fantastic support The FA has given us since we launched Tickets for Troops nine years ago. We know these tickets really make a difference to the troops who can attend England matches.”
All Stories < Previous Story Next Story >