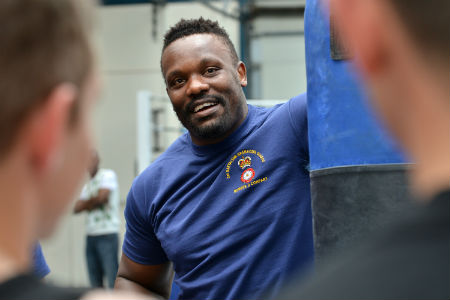 Tickets for Troops is delighted to announce that they have tickets for Dereck Chisora's upcoming fight against the unbeaten American, Malik Scott, at Wembley Arena on Saturday 20th July thanks to a generous donation from their Patron and boxing Promoter, Frank Warren.

To mark the donation, boxing heavyweight Chisora and his trainer Don Charles met with the Army Boxers at the 1st Grenadier Guards gym at Lille Barracks in Aldershot and put the soldiers through a power-packed training session ahead of their own Inter-Company Boxing Championships

Chisora was impressed with the talent that he saw and invited the troops to be his guests on the big night which also features title action from Gary O'Sullivan v Billy Joe Saunders and Carl Frampton v Everth Briceno, live and exclusive on the Channel of Champions, BoxNation (Sky Ch. 437/Virgin Ch. 546).

The London puncher faces one of the biggest challenges of his career against the unbeaten Scott and knows that a victory will elevate him closer to a second world title shot.

Chisora said, "I'm proud that these guys are coming to watch me fight at Wembley Arena against Scott.  I know that the British and Americans Armed Forces are allies, but the Brits will all be in my corner to beat Scott.  While I'll be on the front line against Scott, I really commend these guys who are the real heroes fighting on the front line while we are safe at home."

Ross Barden, Tickets For Troops Director of Operations, said "We are so grateful for this generous donation of tickets. It was fantastic to see Dereck and his trainer Don Charles getting stuck in with the lads from the Grenadier Guards. I know how excited they were to train with him and I am sure they will have an incredible time watching his bout next weekend at Wembley Arena."

Captain J A Keeley MBE, Technical Quartermaster of the 1st Battalion Grenadier Guards, said, "Having one of the big names of British boxing come train with us is a real boost and inspiration to the lads ahead of their own big night at the Inter-Company Boxing Championships.  We're delighted that Dereck and his trainer Don came down to our gym before his fight against Scott, some of the lads are having their first fight so it was something that they will remember."