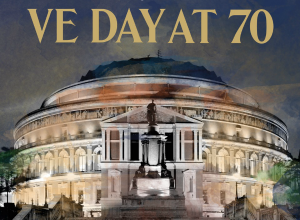 Sir Winston Churchill’s family mark VE Day anniversary with a Royal Albert Hall concert to round off the nation’s weekend of celebrations.

The end of war in Europe is marked with a spectacular evening of music at Classic FM’s concert ‘VE Day At 70’ at the Royal Albert Hall on Sunday May 10th 2015.

The night will be hosted by John Suchet and Myleene Klass with music from the Royal Philharmonic Concert Orchestra and will feature special guest performers Katherine Jenkins, Rebecca Ferguson and Wynne Evans.

As the country celebrates the end of the Second World War in Europe, the former Prime Minister’s great grandson, Randolph Churchill, will read the speech his great-grandfather delivered to the crowds lining Whitehall on that historic day in 1945.

The concert will feature music from iconic British composers including Elgar, Walton and Holst, together with songs from the period including ‘A Nightingale Sang In Berkeley Square’ and ‘We’ll Meet Again’. Scripted narration will tell the stories from VE Day and the combination of speech and music promises to deliver a powerfully emotional evening.

The concert will be broadcast live nationally on Classic FM's and globally via BFBS.  Be part of history and enjoy the celebration at the Royal Albert Hall on May 10th.

We’re extremely pleased that Tickets For Troops has been lucky enough to be donated tickets for this concert.

However, if you haven’t managed to get your hands on a pair, you can still purchase them using a special 2 for 1 ticket offer here: tft.link/VEDAY70