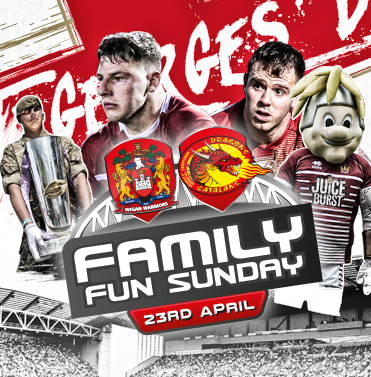 Tickets For Troops are delighted to be working again with Wigan Warriors to offer Armed Forces personnel tickets for the Warriors’ military-themed clash against Catalans Dragons on Sunday 23rd April (3pm KO).

The Warriors will be working with the Armed Forces community to deliver a rousing pre-match military celebration which is set to include a jump-in from The Red Devils Parachute Display Team and abseil by the Royal Marines.

Supporters can also try their hand at various military challenges in the Fan Village prior to kick-off, whilst photo opportunities will be available with armoured vehicles and a military ambulance.

Opening from 12:30pm, the Fan Village will also include live music, entertainment, street food and a licenced bar, promising an enjoyable afternoon for the whole family.

Wigan Warriors hope to see as many serving personnel at the DW Stadium on Sunday 23rd April for what promises to be a fantastic military celebration, alongside an afternoon of rugby, live music and family entertainment.

Members of Tickets For Troops can book up to four tickets here: tft.link/wiganwar