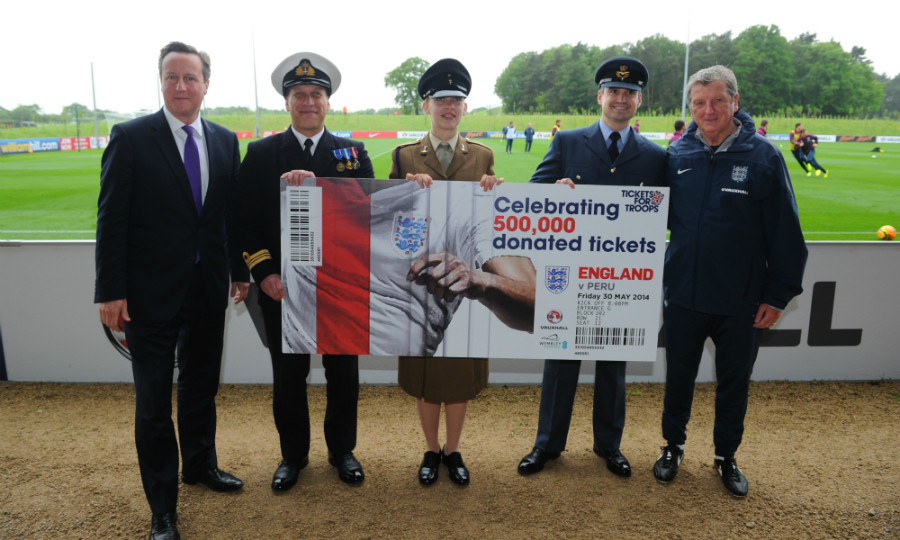 We are extremely proud to announce that we have distributed our 500,000th donated ticket!

Our milestone was marked by the Prime Minister and The FA on Thursday 29th May, ahead of the England vs Peru World Cup warm-up match at Wembley, where over 1,000 troops cheered on our nation's team.

Lance Corporal Louize Watson was extremely excited to be the half a millionth donated ticket recipient and has said “Tickets For Troops is a big help to everyone within the military. I would not have been able to attend this occasion if it wasn't for the charity. They are a fabulous organisation who give so many opportunities to troops and their families.”

Lord Marland, Chairman of Tickets For Troops said: “To have reached this fantastic milestone of 500,000 donated tickets in such a short time is an achievement that all of us are very proud of, but it would not have been possible without the very generous support of the many organisations, sports clubs, governing bodies, theatres and other venues and many, many individuals. We would like to take this opportunity to wish The FA, Manager Roy Hodgson and Captain Steven Gerrard - one of our Patrons - all the best for Brazil and Tickets For Troops will be supporting them all the way.”

Prime Minister David Cameron has supported Tickets For Troops from day one and was pleased to help us mark our celebrations yesterday. He said “I’d like to congratulate Tickets for Troops on reaching such an impressive milestone. Our Armed Forces make sacrifices every day to keep us safe and we have a duty to ensure we are doing all we can for them in return. That is why the Government has set up the Armed Forces Covenant to encourage businesses, local authorities and communities to give something back to our troops. This scheme is exactly the kind of thing we want to encourage and is a wonderful way to recognise these brave servicemen and women.”

Roy Hodgson said “Tickets For Troops is a wonderful organisation and to have donated half a million tickets is an incredible achievement. From The FA’s point of view we are very proud to be able to support our servicemen and women even in a small way by donating tickets. The sacrifices they make puts everything into perspective for us and we hope to do them and the country proud in our own way this summer.”

Steven Gerrard, one of the charity’s patrons said “As a Patron of Tickets For Troops this is a proud moment – we thrive on the support that we’re given by the nation at a time like this and not least from those that are working in the Armed Forces. They are real heroes and to know that over 1,000 troops will be at Wembley on Friday night is a great incentive for us all.”