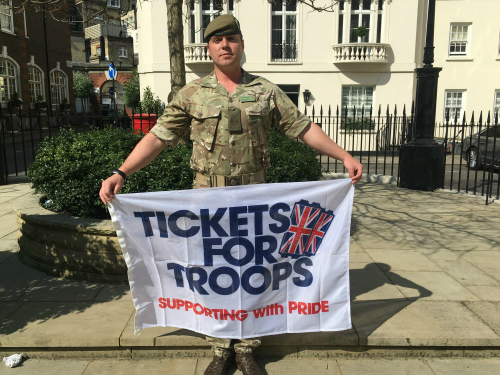 We were delighted to have a visit from WO1 Spiers-King yesterday morning who gave us an update on his impressive training schedule.

Having been training since January he runs five to six times a week, six or so miles during weekdays and takes on a longer run at the weekends – getting up to 16 miles regularly!

He coincides his training with his errands whether that be running to work, picking up pieces of uniform ahead of his commission in the Summer or even popping by the shops to pick shoe boxes up for his wife!

Will is hoping to run the Virgin Money London Marathon 2017 in sub-4 hours and believes the support of his wife, friends and family members coming out to watch him paired with the the robustness leant from being in the military for the last 21 years will play a huge part in his ability to keep on running even when the going gets tough.

Currently the RSM of London Officer Training Corps, Will has an infantry background and has served many tours including Iraq, Northern Ireland and Afghanistan. The pinnacle of his career was serving as the Company Sergeant Major in Afghanistan back in 2011. He will be Commissioning into the Educational Training Services in June this year and we wish him all the best with his next role.

Looking forward to the marathon, Will’s rather keen on the idea of catching up to his pal Capt Neil Fleck (tft.link/NFleck) who is storming ahead on the fundraising leader board.

As we’re never shy of some healthy competition at TFT we would like to ask you to dig deep and please support him here: tft.link/WilliamSpiers-King