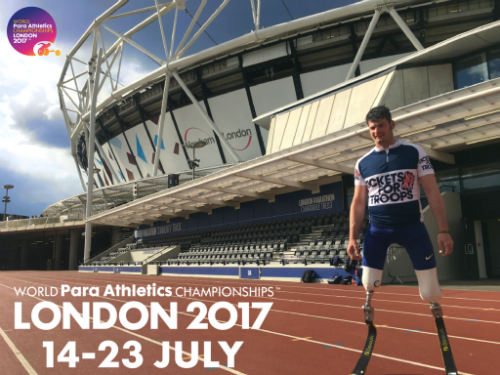 We’re excited to announce that we are teaming up with London 2017 to offer you and your family free tickets to watch world class athletics at the London Stadium in Queen Elizabeth Park. This is your chance to be part of the roaring crowd cheering former British Army Captain Dave Henson to the finish line.

Opening Night of the Championships

Less than three years since lighting up the London Stadium at the inaugural Invictus Games, Dave Henson returns to compete on home soil as he targets a medal in the T42 200m.

Henson will look to qualify for Saturday’s final alongside legend Richard Whitehead, on an evening which sees unbeatable wheelchair racer Hannah Cockroft kick off her quest for a trio of golds.

One year after his Paralympic bronze medal, Dave Henson will have his eyes on making the podium in the T42 200m final. The former British Army captain will likely compete against Richard Whitehead, who will be aiming to give himself an early 41st birthday present as he defends his world title.